On reddit, I was alerted to another 05R game, BA5IC, an OSR adaptation in 54 pages that was released in October and is PWYW. I shelled out the recommended 2 bucks and decided to have a look. I will do a basic review and also compare it a bit to Into the Unknown and 5TD.


tl;dr - A whiteboxed Epic 6 treatment of 5e that has some good stuff in it, but ends up looking a bit more like the author's heartbreaker than a fullfledged game. 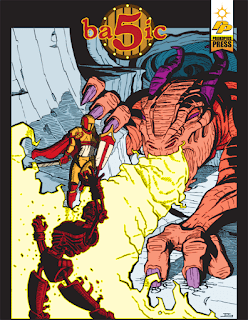 Clocking in at 54 pages in letter format (23,000 words), this is another candidate that goes even slimmer than whitebox. The layout has generous whitespace on the outside, a bit too much for my liking considering the narrow space between columns and slightly cramped space between paragraphs. It is not so much worse than Into the Unknown in this regard though, but still a noticeable difference coming from 5TD's generous spacing on every page.
Still the layout is mostly neat, paragraphs mostly don't bleed on to new pages (or columns, even) and most of what you want to be able to see in a single pagespread, you do see. All in all, a nice and usable layout for the table.

With its slim volume, I first thought this was perhaps another whitebox treatment of 5e, but that doesn't seem quite right. Nor is it B/X. It strikes me more as something more akin to a mix between whitebox and Holmes Basic as an introductory game perhaps? This is underlined by how it goes only to 6th level. But in other areas, it clearly is more of a whitebox game, as we shall see in its monster treatment. More on this later.

The first two pages give us a very brief introduction and then a handy page of definition of terms. Then its off to chargen.

We get your usual three classic races+human, and only three very broadly defined classes - The adept (the spellcasting class), Warrior and Expert. Where Into the Unknown uses 1st level Class features and 5TD uses 3rd level archetypes to pay homage to the wealth of 5e classes weeded out, Ba5ic uses backgrounds. I like this a lot. It's probably my favourite way of 'kitting' the 3 or four base classes with the flavour of later classes, that I've seen so far.
After reading that, my head is toying with the idea of an 'unearthed arcana' class structure for Into the Unknown using this framework (though I think I'd take the feat currently baked into the class feature choice and assign it to the 'kit' background to give it this customisation choice a bit more oomph).

Spells are quite limited. Even though the game goes to 6th level, spells cap at 2nd level and there are only two of those (and six 1st level spells). A sidebar later on explains that this is to help the referee control what magic looks like in their world and that they should feel free to pull in whatever they like and want from 3rd party supplements. Although I wholly agree with the principle of it, I dislike the tendency towards making games requiring 3rd party support from the outset, also found in 5TD.

Unlike 5TD, Ba5ic is meant to be fully compatible with 5e. This is not true for the classes though and I am a bit confused with what the author is going for here. 1st level characters get an extra hit die, adepts recover all spell slots with a mere short rest. Opposite direction of the more old school take 5TD went with.

Experts seem to vastly outshine Warriors as they both have d8s for hit dice, both get extra attack at 6th level and the expert can do loads of extra actions as bonus actions, whilst the warrior gets +2 to hit and a second wind. All in all, class builds strike me as the most significant change from 5e. Without having seen them in play, I frankly find it hard to tell from reading how they work out at the table.

Anyway, a lot of the stuff that comes next is straight up 5e, such as equipment, weapons, adventure stuff like light, vision, movement, encumbrance, short & long rest, until we come to:

Encounters. Here we get an old school take on surprise, random encounters and time in the dungeon progressing in 10 minute sequences and 1 day in the wilderness. This feels a bit too brief and tacked on to me, but I am biased here given how ItU takes pain to try and make a timekeeping system that integrates long and short rests with resource management etc. into the dungeon/wilderness unit of time.

The combat system is as per 5e, with a few sections on movement, underwater combat and such taken out.

Monsters get an interesting 'whiteboxy' treatment, in that we get a list of stuff monsters in general can do and then tables of monster stats sorted by challenge rating, with no further description and a sidebar explaining that this leaves the referee free to come up with descriptions and so forth. I like it. This is the right kind of stimulant for old school creativity to insert into a 5e old schooler.

In a novel move, XP has simply been discarded and levels advancement is based on number of adventures completed. This feels more like a reflection of how people end up playing 5e when XP for killing monsters is (rightfully) discarded.

And here we also learn that the game actually caps at 6th level, making this an Epic 6 implementation of 5e. Curious, but interesting.

We get a basic treasure awarding mechanic, which is fine since the game doesn't use Gold=XP anyway and a small basic/dull garden variety list of magic items (sword +1, bag of holding etc from the SRD).

Then, in an unexpected homage to Holmes Basic, we get a sample hexcrawl wilderness and a sample dungeon, with nice encounter tables, each on a two page spread. I like this a lot.

This review maybe ends up harsher than I expected from the outset.
Despite being broadly compatible with 5e, this is something sufficiently different from 5e that it is worth making (*cough* dungeonesque *cough*). Yet, what is it? A whiteboxed epic 6 version of 5e that is somewhat old school, yet in other departments goes its own way in ways that are a bit... neither here nor there. This gives it more the character of a heartbreaker thrown together with nice format and layout than a game that really knows what it wants to be.

As with 5TD, though it impresses on the brevity, I feel the price of brevity is too costly. Though this is more of a standalone game than 5TD, it still feels a bit incomplete. Or perhaps moreso - lacking in focus.

If this were reworked into a proper introductory game that spends some more pages explaining what an old school game is and how to use this to learn the old school way, telling the reader more clearly what it wants to be and why it is the way it is (some of the sidebars do a good job of it, but I want more), maybe even going full Basic with "what is a roleplaying game" handsholding, this could be something really really good. As it is, it is... interesting, but in a way that makes me more excited about a potential new edition than the current one.

Get this if: You want a whiteboxed version of 5e with E6 baked in. Or want to check out the neat take on backgrounds.

Don't get this if: You don't want that. But really, it's PWYW so check it out. If you find anything of use, go back and pay the recommended 2 dollar tip.
Posted by Anders H at 11:46