First of all, let me start by saying - 5e may be simple and balanced, but class design is NOT.

Class design is really where the designers put in the highest level of complexity into the system. Lots of unique sub systems (battemaster, warlock), maneuvers that break the action economy in unique ways, implied strategic build paths, etc. All stuff I want to simplify away with RedNext - take away the excess of moving parts.

But even besides that, there is lots to consider - Every level gets a bennie of some sort (in three tiers), some hardcore class defining ones, others thematic. And impact of bennies is asymmetrical from class to class (except 5th and 11th). And all of them have frontloaded abilities that are on the surface overpowered.

Weighing all these up and when to put the big ones is a lot to consider - Making the Halfling took time! Dwarf and elf might be easier purely because I now have a better grasp of the ideas behind class design, but they wont be up overnight.

Designer Notes on the 5e Halfling 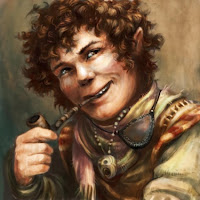 For the Halfling, I lined up Fighter, Rogue and Ranger abilities on each level in a spreadsheet (assymetrical power curve per level makes it difficult to assess the weight of each bennie on each level), made another list of abilities (mainly feats and sub-race abilities) that would be nice to insert, filtered out the bennies that didn't fit a halfling build and started looking according to the following criteria from Menzer's basic:
Besides this, my own gamist analysis of what that makes the Halfling and what it ought to be:

Without further ado, here is the first draft of the 5e Halfling-as-Class (note the intentional lack of build options). Any and all feedback is greatly appreciated.

You are a Halfling – While most of your kin are content with a rural life, rarely venturing even as far as the neighboring village, that is not you. You are struck by a well known but rare impulse among the little folk – Wanderlust. You are rootless, a drifter, drawn to see what lies beyond the next hill.
Your travels take you into the world of men and dangerous lands, demanding that you make the most of the virtues of your people to survive. While the big folk may be stronger, more cunning and even wield magic, you are nimble, sturdy, brave and lucky – Other races may make bigger waves, but halflings unassumingly survive in the face of many threats larger people would not.

As a Halfling, you gain the following class features:

Lucky: When you roll a 1 on the d20 for an attack roll, ability check, or saving throw, you can re-roll the die and must use the new roll.
Brave: You have advantage on saving throws against being frightened.
Nimble: You can move through the space of any creature that is of a size larger than yours.
Naturally Stealthy: You can attempt to hide even when you are lightly obscured or obscured only by a creature that is at least one size larger than you.
Furthermore, you can move stealthily at a normal pace.
Wanderlust: You are a master of navigating the outdoors and react with swift and decisive action when attacked. This grants you the following benefits:
• You ignore difficult terrain.
• You have advantage on initiative rolls.
• On your first turn during combat, you have advantage on attack rolls against creatures that have not yet acted.
You gain the following benefits when traveling for an hour or more:
• Difficult terrain doesn’t slow your group’s travel.
• Your group can’t become lost except by magical means.
• Even when you are engaged in another activity while traveling (such as foraging, navigating, or tracking), you remain alert to danger.
• When you forage, you find twice as much food as you normally would.

Eye for Distance: You gain a +2 bonus to attack rolls you make with ranged and thrown weapons.
Halfling’s Knack: You can take a bonus action on each of your turns in combat. This action can be used only to take the Help, Hide or Use an Object action.
Botanist: You are a master of herbs, both for their taste and medicinal value. You have mastered a variety of special recipes, allowing you to prepare special dishes with useful effects. You gain the following benefits:
• You gain proficiency with cook’s utensils. If you are already proficient with them, you add double your proficiency bonus to checks you make with them.
• During a long rest, you can spend an hour to prepare and serve an especially nutrient meal that helps you and your allies recover from the rigors of adventuring, provided you have suitable food, cook’s utensils, and special herbs and spice on hand. Such herbs can be gathered beforehand with an hour of foraging.
The meal serves up to six people, and each person who eats it regains and may spend an additional Hit Die at the end of the long rest.

Poultices: Your herbal mastery allows you to create especially potent poultices to combine with a healer’s kit to mend wounds and get your allies back on their feet. You gain the following benefits:
• When you use a healer's kit with your poultices to stabilize a dying creature, that creature also regains 1 hit point.
• As an action. you can spend one use of a healer's kit and poultice to tend to a creature and restore 1d6 + plus additional hit points equal to the twice the creature's maximum Hit Dice.

You may prepare a number of poultices equal to your Wisdom modifier (minimum 1) in similar fashion to meals, as described under Botanist.

You can prepare both meal and poultice during a long rest, but recipients can benefit only from one of poultice or meal per long rest (ie, a recipient who healed from a meal during a long rest and then received a poultice would gain no benefit from either on the next long rest),
The poultices you create cannot be applied by anyone but you. After 24 hours, any poultices that you have not used lose their potency.

Stalker’s Dodge: Whenever a creature you can see attacks you and does not have advantage, you can use your reaction to impose disadvantage on the creature’s attack roll against you. You can use this feature before or after the attack roll is made, but it must be used before the outcome of the roll is determined.

Extra Attack: You can attack twice, instead of once, whenever you take the Attack action on your turn.

Escape the Horde: Opportunity attacks against you are made with disadvantage.
Herbalist: Your culinary skills extend to detecting and curing poisons.
As an action, you can inspect a drink or plate of food within 5 feet of you and determine whether it is poisoned, provided that you can see and smell it.
Moreover, You can spend an hour preparing a fresh concoction to cure one poison effect on the creature you are applying it to. It only works when consumed immediately.

Indomitable: You can re-roll a saving throw that you fail. If you do so, you must use the new roll, and you can't use this feature again until you finish a long rest.

Halfling Fortitude: You have Proficiency with all saves.
Furthermore, you have advantage on saves against poison, and resistance to poison damage.

Volley: You can use your action to make a ranged attack against any number of creatures within 10 feet of a point you can see within your weapon’s range. You must have ammunition for each target, as normal, and you make a separate attack roll for each target.

Indomitable II: You can use this feature twice between long rests.

Cunning Stalker: You gain the following benefits:
When you are hidden from a creature and miss it with a ranged weapon attack, making the attack doesn't reveal your position.
Dim light doesn't impose disadvantage on your Wisdom (Perception) checks relying on sight.

Magic Sturdiness: You have advantage on all saves against magic.
Additionally, you may take the  Use an Object action to activate magic items.
Slippery: You gain +2 to AC against melee attacks made by Medium-sized creatures or larger.

Indomitable III: You can use this feature thrice between long rests

Elusive: You are so evasive that attackers rarely gain the upper hand against you. No attack roll has advantage against you while you aren't incapacitated.

Stroke of Luck: You have an uncanny knack for succeeding when you need to. If your attack misses a target within range, you can turn the miss into a hit. Alternatively, if you fail an ability check, you can treat the d20 roll as a 20. Once you use this feature, you can't use it again until you finish a short or long rest.
Posted by Anders H at 17:51 No comments: