B/X-inspired Monsters for 5e / Into the Unknown (followup)

Short follow to my previous post on this. I think I've arrived at a good format that strikes a decent middle ground between the simplicity of B/X and the long format of 5e.

Note the addition of Morale and numbers appearing. Those rules should never have become 'OSR'. No idea why they were cut from 3e nor why they didn't return for 5e. They are lifeblood of D&D encounters, imo, and certainly for B/X and are back for Into the Unknown. 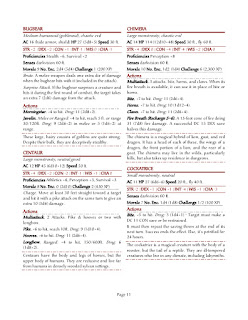 On this note - What do grognards make of the numbers appearing stats in B/X? Do you use them as is? I've always felt they tended to be on the high side.

Thankfully, Labyrinth Lord's monster descriptions are open content (though I am shortening them), since the SRD has none - Another one to add to the credits. It's all formatted pretty tight now. Only thing left now (groan) is find the right monsters to cut, add descriptions for the remaining 180 critters and rewrite the overly verbose "natural language". The 5e writers just did not give a fuck about brevity.

For comparison, I tried to put the short writeups from the 5e Basic document for these four into one page as well. They are a bit longer, but actually they do a pretty decent job of condensing the information in a clear way, I think. It's the verbosity that's the main issue and prevents quick scanning of special abilities and attacks. 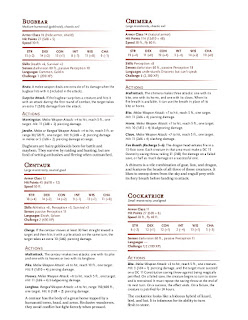 In the far far future Earth, indeed the universe, is slowly dying. Man lives under a bloated red sun in the inherited ruins of former ages and the decadent nihilistic fatalism of the end times have set in long ago.

The Fading Earth is chimerical, as if seen through a shamanistic dreamlike lens where truths and fiction are mixed without order, and reality often follows a more narrative than physical order.

Facsimiles of the Knights of the Round Table ride out of the mist in a crusade against the Old Ones stirring as the end of time approaches.

Archetypical elves stalk the dark woods (or peddle yellow lotus weed in the city, struggling with the existential crisis of a race resurrected out of time in a world where little matters anymore).

All myths are potentially right here. And all past events potentially here too. As dreams of a dying earth, they appear without rhyme and reason as caleidoscopic re-interpretations of the past. 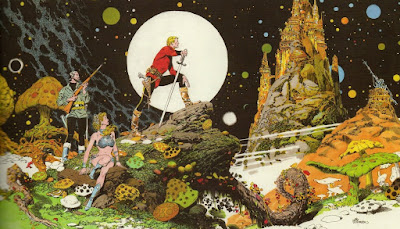 For those who haven't read it, Mythago Wood is a fantasy novel from the 80s. It's about a guy who explores an old forest that acts as a kind of receptable for the racial consciousness and memory of mankind, storing archetypical jungian myths from now to way back to the ice age and incarnating them inside the woodland (robin hood, king Arthur, etc. but often not quite the memories we have of them today, although these also play a part).

I found it a very inspiring way to look at fantasy and thought "what if the earth has it's own storehouse consciousness where it remembers all the myths, stories and real events that sapients have been sufficiently conscious of over time?" And then fast forward to a Dying Earth setting where this Gaia consciousness has grown senile and, rather than just storing it, has started replaying its old memories, or facsimiles of them (it is senile after all), as actual incarnated and embodied places and people on earth, without regard for what was history, history embellished with myth or just plain fiction.

Post-apocalyptic fantasy future-earth with just about anything from earth history, myth and fiction you want in it. I think this could make for a fun setting for D&D. Some parts of the setting might be stable and 'ordinary' (or at least, ordinary by the standards of the future fantasy dying earth) - separated by vast stretches of mythland (and also dotted by pockets of mythlands) where the dreams of the Fading Earth have taken hold - where Alice in Wonderland Reimagined is as likely to show up as the historical figure of Casanova.
Posted by Anders H at 09:12 2 comments:

B/X-inspired Monster book for 5e / Into the Unknown

I known I said that making the Magic Book was without a doubt the most editorially demanding of the set. But the monster's book is not far behind. Might be more demanding in the end.

I've done all the rough trimming and editing by now. Removing monsters that are obviously not a fit for B/X, removing those of unsuitable challenge ratings and trying my best to make the stat block simpler and take up less space.

this has trimmed my original 140 page draft down to 63 page working document (for comparison, magic went from 122 page draft to 39 pages). I want to get down to 50 pages or less, but the choices from here are harder ones.

I currently have 198 unique entries - Compared to the 186 entries found in B/X. It is not a like for like list of critters. And there is a few I will have to create on top of that (dwarf, elf, halflings and of course - Devil Swine).

Not to mention, most of these have no description in the SRD! They will have to be added on top (groan).

And cutting out monsters is hard. Monsters are cool. Almost all of the ones left speak to me.

Here are some examples of non-b/x monsters I have included in the working document so far:

How do you leave these out? Maybe young dragons can go - There are there basically to have dragons to fight at lower levels. But there rest are just very cool and iconic to my mind.... (It's just weird B/X has no devils or demons).

Below is the table of contents so far for it, and two sample pages to give an idea of where I am at, in regards to the stat block format. I am sharing here mostly for feedback purposes - 5e is not as bad as 3e and 4e for monstrpously large stat blocks, but it is still quite removed from the simplicity of 2e and lower. I think I've come a long way towards condensing it, but there may well be more gains to be made here (ie, do stat blocks need a language entry?). 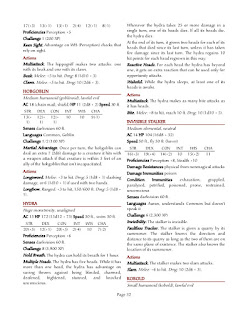 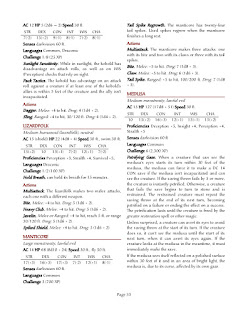