Comparison: Five Torches Deep vs Into the Unknown

It's time for the.... Battle of the 05R games! Into the Unknown squares up against Five Torches Deep and we take a look at how these two games differ and what they have in common. 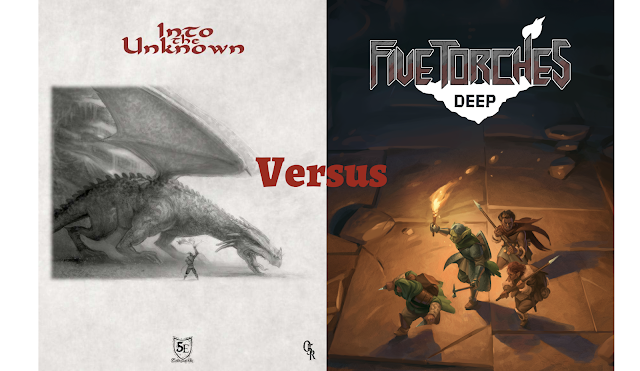 As I summarised in the review post on 5TD, If Into the Unknown is a 5e adaptation that seeks to emulate the "non-advanced" B/X style of play, then 5TD is the 5e equivalent of S&W Whitebox, an even lighter retroclone than the famously brief B/X.

So what do you get for the difference here? The most obvious are number of monsters and spells. 5TD has a one page spread with six monsters. ItU has a dedicated book of 64 digest-sized pages. ItU has a dedicated 54 page digest-sized spellbook. 5TD gets the job done in 4 pages. Monsters in particular is something you'd probably need 3rd party supplements for when running 5TD. Since both use gold for xp and morale, and ItU's monster book has both morale scores and treasure types for all monsters, the ItU monster book seems like a good fit for this.

Overall, 5TD seeks to be the slimmest possible version of an OSRed 5e geared towards wilderness exploration and dungeon crawl (limiting itself to 48 in letter format pages was a design goal for 5TD). Although this makes it somewhat inaccessible to those who are not already familiar with both 5e and OSR-style gaming and demands use of 3rd party material, it nonetheless succeeds at putting a body of rules ready for the table play in very accessible format and layout in just 48 pages.

In contrast, ItU seeks 'merely' to be a significantly lighter OSRed version of 5e geared towards wilderness exploration and dungeon crawl, but one that is still a full-fledged standalone game that should give game tables the same tools to run a campaign as B/X originally did (for comparison, my design goal was to keep book 1 at 50 digest sized pages or less. It came to 52 in the end as it would have been too much compromise to reach that goal).
So ItU has a more thorough treatment of what old school play is and how to run games and campaigns accordingly. Same as B/X it has rules sections on how to make a dungeon (and run a dungeon) and settlement (and running urban phases of play) and, oddly enough, is the only game I know of that has comprehensive chapters on how to design and run a hexcrawl. Despite the popularity of hexcrawls in the OSR-sphere, there aren't actually many rulesets that tell you how to do it.

5TD shares the same design vision as I went for with ItU in regard to layout: That the text should be optimised for easy scanning and use at the table. ItU splits the rules into 5 digest sized booklets, to help avoid too much fighting over who is using what book at the table. 5TD doesn't need that, as it is comparable in size to each of the booklets (except book 2).

In terms of the layout and design overall, I think %TD succeeds better at this. Its paragraphs are less cramped than I ended up having in Into the Unknown, easier to scan.
Below are some examples of roughly equivalent sections in first Into the Unknown and 5TD (note that ItU is digest sized and 5TD letter sized):

This will be a dense overview of differences, but I hope it give you a detailed impression of how the two games approach their common task in different ways.

Both games are based on 5e and simplify the 5e chassis a great deal to achieve an old school style of play.

Both games  shave down the number of classes to a basic four and both implement a class choice to pay token homage to the variety of classes found in 'advanced' 5e (fx. Itu has a Class Feature choice at 1st level that let Magic-users choose between Wizard/Sorcerer/Warlock, 5TD has an archetype choice at 3rd level that give Mages similarly named options).

Both games have ditched feats and the skills system in favour of an even looser and more broadly defined 'proficiency area/check' system.

Both games are explicitly designed to support wilderness and dungeon exploration and what they add of rules to the game are all geared towards this aim. Neither game shies away from using more modern mechanics to achieve this goal (for example, in tracking encumbrance.

Both have rules for henchmen.

Both games are geared towards procedural generation of content and outcomes in play. So they both have reaction rolls, morale rolls and so forth (more about some of these procedures below).

Both games have level progression tables closer to old school numbers (5TD approximating the Wizard xp progression, ItU based on the Thief progression table) and use gold=xp for awarding XP.
Both limit the available levels to 10 and 9 respectively.

ItU has full compatibility with 5e as a design goal. Thus the classes are designed to be fully balanced against characters designed with the 5e PHB and vice versa and basically the game uses similar math.
5TD departs from this to have classes be significantly lower powered than their 5e counterparts and more similar in this way to TSR-era D&D and ditches backgrounds. It also flattens the overall maths of the game even more than 5e.

Likewise for compatibility purposes, a lot of rules in ItU are taken straight from 5e, with the main difference to 5e being terser presentation and clarity of when to use the rules (fx. exhaustion, hiding, light & vision, traps, conditions and the combat rules).

In contrast, 5TD has its own simpler rules for traps, stealth, light and exhaustion.

In what is perhaps the biggest departure from 5e, 5TD radically simplifies the combat system. Gone are bonus actions, or having a suite of standardised actions to take, along with rules opportunity attacks, two-weapon fighting, unarmed combat, cover, being prone, creature size, initiative rolls, underwater/flying/mounted combat. In its place, we get a simpler range definition (close, ranged, far) and a declaration that if one side is wildly superior in combat, no rolls are needed. Less than 2 letter-sized pages all in all.

In contrast, ItU follows 5e but focuses on condensing and clarifying all the combat rules to a mere 12 digest sized pages with clearer layout and organisation for use at the table.
Its new contributions are on the GM side - A new framework for encouraging and adjucating improvised moves in combat and distinct rules for retreats (both orderly and not) and chases and a 2 page discussion on how GMs can make combats more exciting.

ItU retains and condenses the 5e rules for breaking items, poisons, traps. 5TD has its own corruption mechanic for dealing with poison, disease etc and has a very basic handwaving mechanic for traps.

Following B/X, ItU has a stronger focus on time-tracking in the dungeon and wilderness than 5TD. It departs from B/X with a modern take on time-tracking, by rolling resource-management and procedural encounter generation into the same mechanic and applying the same time-advancing mechanic to all phases of play (dungeon, wilderness & downtime), basically making wilderness and downtime more explicitly turn-based the same way dungeon exploration is in B/X.

On the other hand, 5TD puts more focus on the resource management aspect of the game, introducing new modern mechanics for supply and load, with rules for foraging, equipment damage, repair and crafting tying into this.

I mentioned both rules favour procedural generation of content and outcomes in play. Since 5e has very little of this, it is perhaps not surprising that the two games manner of implementing this differ.

Both have Morale - ItU morale lifted straight from B/X and its main contribution here is adding in morale scores to all creatures in the monster book.
5TD has a simple and elegant morale calculator based on wis mod+proficiency bonus+HD against a d20 roll.
Both have reaction rolls. ItU uses a modernised version of B/X reaction rolls, whilst 5TD has its own d20 mechanic.
On a personal note, I would never use a d20 for morale and reaction rolls as I'd want a bell curve for this to make it less swingy.

5TD has an excellent 4 page spread for creating new monsters on the fly and a sample of six pre-generated monsters.
Meanwhile ItU has 5 pages dedicated to procedural generation of new magic items and another five pages of pre-generated items.

Finally, ItU comes with 10 extra pages on how to make new tables, make rulings and houserule your game to suit your needs.


The last point I want to discuss is spellcasting. ItU simplies 5e spellcasting system a little bit and shortens the spell list somewhat (but not overly so) to a more manageable number, but its main contribution is making spell descriptions a lot shorter and terser, as opposed to the overly detailed boardgamey spell descriptions of 5e.

5TD, in its secondmost radical departure from 5e, has one page for arcane spells and another for divine spells. Five spells per spell level, each get two lines of description and that's it. The more I look at this, the more I like it. This is a proper open-ended magic system (the open-endedness is balanced against a spell failure mechanic).

Because let's face it - 5e spells are boring as fuck. They've solved the linear-fighter-quadratic-wizard problem by making spellcasting a wholly utilitarian boardgamely-constricted affair. That is to say, taking all the magic out of it.
Spellcasters in TSR era D&D had limited and more difficult opportunities for casting spells, but where the casting of spell could radically alter a given situation. In 5e, spells are easier to cast and can be used far more frequently. In contrast, spells are weighted more in the direction of influencing situations as opposed to radically altering them. This to me takes most of the flavour out of spellcasting in 5e.
And ItU more or less follows suit on this (I chose to do so in full knowledge of my own dissatisfaction with the system). Which is why I like that 5TD have gone towards a much more open-ended system that demands creativity from spellcasters. I'd also offer up Wonder & Wickedness as an alternative level-less spell system that I think could work well. In the future, I'd love to make an alternative spellbook for ItU (or several) that offers an OSR take on spellcasting for 5e, even moreso than what TSR D&D managed, which still has plenty of bland utilitarian spells (deliver us from Spider Climb and Magic Missile).

Although both systems get mentioned as candidates for those seeking lighter OSR versions of 5e, it should be clear from this comparison that their design goals and ways of implementing a fundamentally similar vision are quite different in scope and execution. Recommendation? Get both and take what you like from them. :)
Posted by Anders H at 16:10