In Praise of "Black Box" D&D

when it comes to non-Advanced D&D, The internet, and in particular the OSR blogosphere, has deserved praise galore for the B/X sets for D&D.
And whilst not quite as enthusiastic, the Mentzer editions for those Basic and Expert sets also get plenty of praise for its art and way of introducing the game.
The Holmes set also has its fair of passionate fans. And of course the original brown booklets themselves.
Of newer releases, the Rules Cyclopedia also has a large following of fans.

One release that hardly ever gets a mention is the 1991 'black box', by Timothy B. Brown and Troy Denning. Actually, the Rules Cyclopedia was published as a sort of companion to this set. Together  they represents the fifth and final edition of non-advanced D&D.
It's short, 64 page booklet, so much the same as its predecessors, comes with a simple dungeon map (the print quality of which is shockingly high and durable), some dice, some paper miniatures for the map, and DM screen inside which is are 48 color coded "dragon cards". 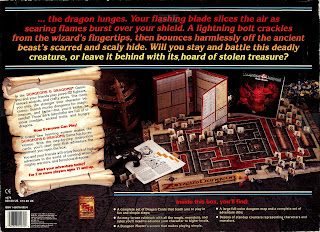 Rules-wise, the main difference is that it goes to 5th level instead of 3rd, something I always felt made good sense (or perhaps 4th level). It saves some space by not having the same kind of introduction as the previous Basic sets in the booklet. That is reserved for a separate item in the set, the "Dragon cards".

The dragon cards is what sets this box apart as an introductory set. Each card explains an aspect of the game and then the rules. Each card covers everything from 'what is an rpg'. 'what is a DM' to 'what is a reaction roll', 'what is armor class' and 'what is a saving throw'.

Then you turn the card over to the other side where there is an unfolding play sequence (the "escape from Zanzer's dungeon") from card to card that shows you how it is actually used in the game. It starts out as a solo sequence with the map, then as you get the hang of it tells you to get some friends together and play the escape as a group.

It's a brilliant way of introducing the game. I'd have faith in any kid being able to learn the game on his or her own with these, thoroughly enjoying the ride of reading through the cards while doing it and being pumped for the first session when it comes. It is probably the best introduction to the D&D rules ever made.

I cut my teeth on Mentzer's box and the aesthetics of that box are the ones that mean 'D&D' for me.
I thoroughly enjoyed going through the black box's "escape from zanzer's dungeon" learning sequence a few years later though. And I did actually learn more about the game as there were items I had glossed over previously that the dragon cards emphasized and demonstrated.

I do know that if a kid I really like ever wants to learn D&D, it won't be the 5e starter set or Mentzer's Basic I will recommend. I will hand him the 'black box' set to learn it from.
Posted by Anders H at 11:20