Next up is another map many will know but few have praised - The map of Ansalon from the 2nd edition Dragonlance boxed set "Tales of the Lance".

First Impressions: My initial impression is not as favourable as the preceeding ones, but there are still some interesting things going on here: The gulf of the new sea tells a story about how kingdoms shape up in central ansalon. Southern Ergoth looks like a kickass island of adventure. And I want to know more about that southwestern strip of the mainland bordering Southern Ergoth.

I'd also like to know more about those island kingdoms up in the northeast corner. And what's going on around the Bay of Balifor? Besides that, the north and south just sort of... end, with wastelands at each end (plains of dust/Icewall, Northern Wastes/Nordmaar). The bloodsea puts a downer on what could have been an eastern Ansalon full of vitality. And the centre of the mainland is just rammed down with giant mountains. It's not really clear how eastern Ansalon relates to central Ansalon, if at all.

Visually, it is 'nice enough', not ugly, but nothing special. Paper material poor and falling apart from use.

Further Thoughts: I frigging love this map. Not for the way they designed the geography and placed the various realms, nor for the artistic impression - But take a good look at the map legend: 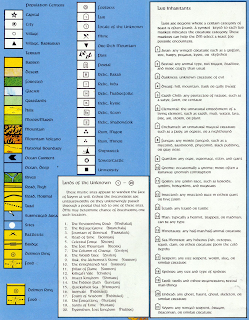 How cool is that?!? I've spent hours pouring over the placement of all these sites. mysterious places never fully explained (yet legendary enough that the names go on a map) pop up all over the place, giving new ideas about what is going on here.  Relics of old people waiting to be found. Ansalon has it going on!

And LAIRS. This map actually tells me where on Ansalon critters tend to live. Monsters have a place in the world that extends beyond the random encounter tables. My thoughts are spinning about the impact on local communities of living near giantkin or fungus(?!?). This makes the map and the setting come alive like nothing else and revolutionised my ideas of how to make an evocative gaming map.

In terms of design and style, this map is not bad but ultimately forgettable. The exceedingly generous map legend turns a decent 3/3 map into a great one. Too bad so few have followed suit on what makes it so great.
Posted by Anders H at 21:52