NB. If you're only here for the cool new map, it's at the bottom of the post.

Primeval Thule is a "sword and sorcery" pastiche setting that takes its primary inspiration from Robert E. Howard, Clark Ashton Smith and H.P. Lovecraft - For D&D. It has books for 5e, 4e, pathfinder, 13th Age and Savage Worlds. Here I will be reviewing the book for 5e.

Despite the strong influence these authors have had on the D&D genre, D&D settings who take these as a primary and overriding influence are rare, so a setting adopting a more purist interpretation of these is a welcome addition. The concept art for the setting certainly makes an evocative intro: 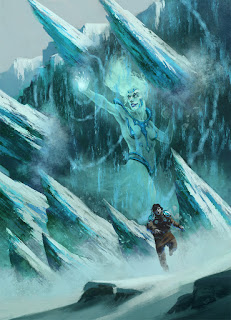 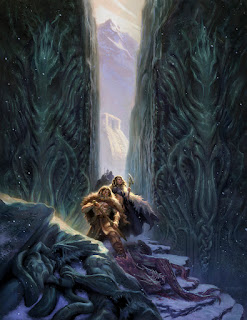 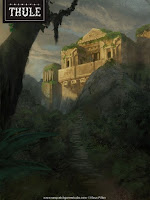 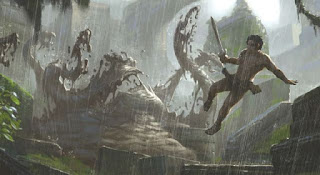 What other settings might compare to such an effort? Setting to one side pastiche OSR efforts (such as Astonishing Swordsmen & Sorcerers of Hyperborea), then Wilderlands of High Fantasy has a lot of S&S, but its (delightful) kitchen sink approach means it can not be considered a focused effort for the genre. Dark Sun perhaps is the best attempt at the genre. Not in the least because it is a genuinely innovative and well executed take on the genre as opposed to the pastiche efforts seen elsewhere (note: I love a good pastiche. It's a timeless stable of fantasy - And Primeval Thule being a pastiche effort in no way detracts from its merits. It just means I evaluate it on how well it manages to pastiche).

Which brings us to the design team: David Noonan who worked on a bunch of D&D books for WotC from 3rd to 5th edition, Stephen Schubert, once lead-designer on 4e D&D, and Rich Baker, who wrote a bunch of 3e books (including the Forgotten Realms setting), wrote some books for the original Dark Sun line and was the lead designer on Dark Sun for 4e. An interesting cast for a mainstream setting effort in a genre that is typically the domain of DIY creators in the OSR.

The setting at a glance

Primeval Thule is a sword & sorcery pastiche that most calls to mind Conan's Hyboria. It is set as a bronze age society in Greenland 25,000 years ago, three centuries after the sinking of Atlantis.

It has all the things you'd expect - decadent city-states, lost worlds, barbarians, corrupt priests and wizards, slaves, savage wildernesses and such. It narrates this in the form of a travelogue from someone from another land. This allows the book to explain also what it is not ("there are no knights here, O king") and frames the callous and brutal nature of the setting as it would appear to a non-native. It is not quite The Wanderer's Journal from Dark Sun, but it does its job well enough.

The book does a good job of describing the lay of the land (which is dominated by jungle and glaciers) and its flora and fauna and how hostile all of it basically is to humans. Reminiscent of Dark Sun (albeit less extreme) and sets the tone in a good way.

Besides a plethora of unnamed lesser gods, there is a widely worshipped pantheon of nine deities of civilisation (half of them evil), who generally oppose the many slumbering Old Ones seeping through the cracks.

Your go to monsters are not orcs, goblins, ogres, devils and demons, but beastmen, deep ones, serpentmen, winged apes, mi-go, moonbeast, Shoggoths, giant snakes, sabertooth tigers, rakshasa, headhunters and cultists of the Old Ones. Your otherworldly critters tend to come from beyond the stars rather than other dimensions (parallel earths are still a thing). I like it.

I have read some online critiques that it does not do what it sets out to do (which is - properly pastiche the Conan+Cthulhu genre) but I mostly disagree with this. Some of the critiques are put down to inconsistent editing and tone of the setting and others are, imo, simply a product of a much too restrictive view of the genre.

One argument I will address is the presence of demi-humans. Elves I find are quite well executed - They have their home city which is eerily quiet because they are all basically stoned out on drugs. Love it!

Then there's dwarves, which is less well executed. They are a race of arms dealers and mercenaries who have only one city (and a few wild clans in the icy north), so there is that. And in the bronze age culture of Thule, they are the only ones who know how to craft iron and steel, a secret which they guard zealously (including hiring assassins if they discover thieves or looters wielding steel). Nice touch. And then what? I am missing some attempt here to situate them better in a S&S context. Accentuate their greed, maybe make them incapable of empathy (clan loyalty does the job) and obssessive nature. Guys like these maybe:

rather than this
I don't know... But something more.

And then there are halflings. I don't know what the fuck they wanted them in for. They are described as savage-but-friendly woodland dwellers who prefer to hide from others and are very good at that. A kind of Dark Sun-lite take on them? I don't know what they are doing here. Absent a good new take on them, I'd simply erase them. Outside the player-facing description, they are referenced only very briefly in the atlas, so it's an easy job. If kept, I'd go the Dark Sun route and have them stand in for REH's Picts: short, absolutely savage and hostile head-hunters. Thule has head-hunters anyway, so not a far stretch.


Either way, making any of these a player race seems odd given their rarity and doesn't fit well with the tone of a S&S setting. The kind of races I am looking for in a setting like this is Amazons (sadly absent) and Atlanteans (which we do get). If you must have a demi-human PC, make it a sidebar as a strictly optional rule for those rare groups who come into contact with them.

Though I recognise the inconsistent tone of the book at times (grim and brutal setting... with 'heroes'. Episodic adventure, here's some campaign arcs), they are more cosmetic flaws than anything, easily brushed away and do not significantly detract from the upsides of the book:

First of all - This is a solid pastiche. It oozes flavor, hits a lot of great notes and you have no problem envisioning Conan having Conan-esque adventures in Thule. It works. What few things I may be missing can easily be inserted.

Besides the overall good execution of the setting atmosphere and depth, the setting stands out as being more than just a tourist guide to the setting as many books of this type end up being, with a strong focus on helping both GMs and Players to get into the setting and make use of it. Make no mistake - This book wants to be used for gaming.

On the player side, we get narratives for 5e - which is basically backgrounds, but anchored in the setting and with a few extra mechanical bennies. An excellent and simple way to get players immersed in the setting from the get go. It's stuff like "Free Blade", "Dhari Hunter", "Katagian Pit Fighter", "Jungle Trader", "Star Lore Adept", "Ice Reaver" and "Sacred Slayer". They all come with nice suggestions for where one might be from and what classes work well with them. All settings for 5e should come with their own background selection like this. It's great stuff. Also, no paladins. Worth mentioning.

The rest is there to support the DM at the table and fuel his imagination. No less than 24 dungeons get quick writeups. The Atlas has nice little sidebars on what kind of adventures could be run in each area. Scatterred through the atlas are select maps of dungeons in the region. And the focus in the atlas is generally on "Here's the quick intro to the place, here are blurbs for interesting NPCs to have some fun with and here are adventure locations for you to explore". It's good solid game-friendly material.

I like terse and slim settings that don't burden me with 'canon' and excessive lore. Thule is on the heavier side for a setting book, but its focus is absolutely on the game utility side rather than developing lore and trivia. A top effort in this regard and something that makes it a really worthwhile investment to pick up rather than just make your own setting. It packs the book with info to get your imagination going and develop stuff, rather than encyclopediatically tell what it is all about.

One last thing on the "good" list deserves its own entry:

My first impression of the map was one of those things that turned me off the setting a bit to begin with. I mean look at this: 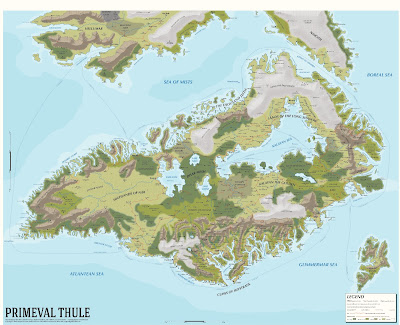 In terms of artistry, this is as functional as it gets. Just plain colours, no iconography, barely even any gradients. But when you look at it in detail as a game map, it is marvelous. It does the same thing that I praised the Tales of the Lance map of Ansalon for doing in my review of that map. It fucking loads the map with adventure sites.

What's the deal with Cruel Haddar's Tomb in the Skullthorn Wilds? What is in the Dungeon of the Man-bane in the Semiji Jungle? The Sleeping Fortress in the Valley of the Last Breath? The Caves of Entropic Wonder at the edge of the Serex Glacier? Or City of the Risen Apes in the Kurmanur Wilds?Or Lair of the Thought Eaters in the Sussurian Jungle? Or the Tombs of the Marrow Reavers? Temple of the White Ape? Caves of the Red Plague? Eyrie of the Sky-steeds?

I don't know, we are never told anything about them. But it makes me want to fucking go there and find out. I could go on listing sites; the map is absolutely littered with them. And some of the locations do get short blurbs in the Atlas to get you going.

It's the kind of map that makes me want to run an open sandbox campaign where the players (not the PCs) have full access to the map and can indicate to the DM what sites hold their interest and then the DM can seed the rumours table with these and more.

Fortunately, the basic nature of the official map means that it wasn't all that difficult to separate the different geographical types and legend of the map into layers and re-draw a new map on top of it with just a bit more artistic effort.

Below is the map I whipped up in a day or two, in two versions. A clear one and a more faded 'older-looking' map. They are really big (6853x5514, 37 MB) so you get all the wonderful detail of the map if you want to print this on a giant-sized sheet. I'm printing it on A3 later this week and looking forward to the result, but this could easily take A2 as well.