For the fifth instalment, we come to Cerilia of the Birthright setting. And I move from admiration to love. 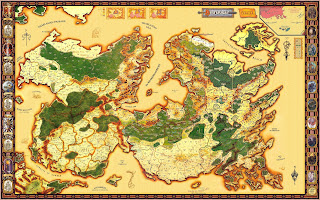 First Impressions: I first became aware of birthright when the Birthright Conspectus was included in one of the boxed sets I bought at the time, which included the fullsized map above. It was, simply put, love at first sight. I adored the the woodlands, the mountains, the colour scheme and the stapled borders  - It seemed like a world truly alive. More than anything, it was the map that made me want to know more about this setting.

Further Thoughts: This is is still one of my favourite maps, maybe my alltime favourite. Although the scale of Cerilia is clearly more localised than Faerun or even the Flanaess, the sense of there being plenty of opportunity for exploration and adventure is developed with stunning level of detail instead - Where the Forgotten Realms gives a sense of never running out of new lands across the mountain ranges, this map gives more a sense of each set of hill having new adventure before you even reach the mountain range. And I think I like this setup better for a setting map - It makes the world feel more intimate. In fact, if this map had had a creature/location legend similar to the one in Tales of the Lance, it would be unconquerable for 'greatest of all time' setting map. A map you could run a campaign with, without even needing a setting book.

Where Greyhawk in particular inspired me for how to draw up a setting map in large scale with placing of ocean and such, Birthright sets a different benchmark that I am still struggling to emulate.  It shows how to make a map come alive through loving attention to detail. Less is often more when it comes to setting development, but not when it comes to maps. You can cut out a 3:4 pretty much anywhere on this map, at any scale, and that cutout would be a worthy standalone map on its own.

I have a good deal of appreciation for Birthright itself. It is often criticised for being bog-standard medieval fantasy, but this is what I loved about it - No one else seemed to ever have made proper actual mythic medieval fantasy for D&D - In Birthright, an Arthurian knight can engage in jousting and real-politics before riding into misty mythic woodlands for fantasy adventures. The blend of mundane mediaevalism with the mythic is something it does better than most settings. However, I sometimes find myself studying this map as if it were somewhere else, unknown, and wondering what each little stapled domain is like and what mythic vistas it holds. If I were to run a sandbox based on a pre-generated map, Birthright would be it.