5e as the OSR engine of choice

So, recently I've been pondering the right D&D system.

Since then, I've been leaning heavily towards 5th edition as the OSR engine of choice. Now, some of you may say "5th edition isn't OSR, man. It's got feats, and warlocks and dragonborn". And sure, it probably isn't. I am calling it the OSR engine of choice, because I delved into OSR games looking for a system designed on principles that the OSR champions: Simplicity, streamlined, easy to houserule, speed of play, limited amount of moving parts.

Use one of the skill variants in the DMG for simpler and better skills and houserule in a stricter healing system and I'd say you have a lean, balanced and fast engine that can stand toe to toe with any OSR system. 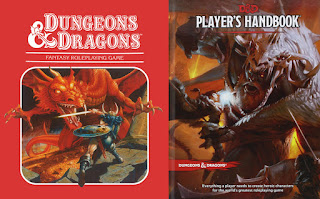 And I have to say at this point: I was DEAD WRONG when I claimed "[5e] is so very tight and balanced - meaning every tinkering has a consequence".
5e IS balanced, compared to older games. But tight? No. I basically just projected my assumptions of modern games on to it. Unlike 4e and 3e, 5e is designed to be tinkered with - The DMG gives many variant rules and optional sub-systems. But these are just the tip of the iceberg for houseruling really. The big difference between 5e and other newer editions is that it holds a lot less expectations about how the game is supposed to be played and doesn't have as many interrelated moving parts. The basic chassis covers most of it and hardly needs tampering and whatever else you change, it is generally clear what will happen when you change it.

The 5e Player's Handbook of course has a slew of classes beyond the 4 classic ones. And I like the idea of classes. to personalise a character. I just don't like all the moving parts it entails. It overdoes what it needs to do, to my mind.

The Backgrounds element of 5e covers a lot of the concepts previously handed with classes, kits and prestige classes (although maybe the Narratives from Primeval Thule does it even better) - but still, I'd like a teensy bit more. 2nd edition came the closest in representating the various new classes as sub groupings of the four basic ones, but didn't go nearly far enough. I think it can be done simply enough with 5e Basic though. Off the top of my head:

The class features wouldn't be much - Enough that a Paladin should feel thematically different from a Ranger. But not so much that they become something other than a tacked on feature of the basic class: Fighter/Magic-User/Rogue. And should be simple enough that it is easy to invent new features for Cavaliers, Witches, etc.

For Fighting Men, borrowing the most defining bits from the existing classes, maybe something added at a few defining levels. Done.
For Magic Users, even simpler. It would mostly be a matter of how you acquire your spells (wizards study, sorcerers intuit, warlocks bargain) and spelling out the procs and cons of each approach. Maybe allow for a different spellcasting attribute based on feature.
Rogue is already more or less there - Just tweak arcane trickster into something a little closer to a 2nd ed bard and you're done.

Hell, throw in some race-as-classes for dwarves, elves and halflings (maybe with a sidebar for an optional "race AND class" rule) and a small section for "changing class features" and this has the makings of a great OSR rendition of 5e. Call it "Red Hack 5e" or something. Fully compatible with 5e, with all the flavour of basic d&d.
Posted by Anders H at 15:03