Following on  from my Setting Map review series and my more recent thoughts on 4e's Nentir Vale and Dragonlance as a coming-of-age sandbox, I've decided to start a review series of published settings overall. Mostly D&D, but we'll be delving into some 3rd party settings, Warhammer and a few others.

These reviews will be personal and mostly aimed at giving the reader an impression of the flavor, style and gameability of the setting.

I am starting with the setting that has probably the greatest exposure of all.

The forgotten realms! Everyone knows it, or knows of it, at least.

Quick intro to the setting

(See also my review of the map of the forgotten realms)
Let's start by showing the realms from its most flattering side. Quote Ed Greenwood, from the old 'gray box': 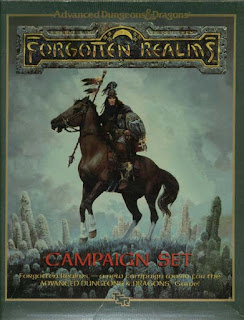 "Most of the area under discussion here has until recently been covered by wild forests and unsettled grasslands. Civilization is still a novelty in much of this world, even the oldest of cities on the Inland Sea, or the founding of Waterdeep, the greatest City of the North, are within the memory of the oldest living elves of Evermeet."

"City-states are common, and nations on the increase as more of the wild lands are pushed back and gathered under a single king or government."

"Finally, the Realms are a land of adventure, and therefore adventurers. It is the time of heroes, when one man of pure heart (or with a powerful artifact) may hold his own against enemy hordes, where legions of evil forces may muster and be destroyed by the actions of a few, where the nations rise and fall on magical tides which mere men can control."
In a nutshell, a sword & sorcery setting for exploration, where human civilization is still in its seedling stage - A quick look at the main adventuring areas gives us an outlook like this:

The Dalelands - Sure, they are clichéed by now, but smatterings of peaceful little rural communities separated by deep woods where monsters and ruins abound amidst abandoned elven realms is quite frankly an awesome sandbox to start a campaign in.

And frankly, when you sit in your dale and look around, each direction is just a promise of even more adventure:

Cross a small sea to the east to go exploring in a wild west land of independent city-states in The Vast.

Go west to Cormyr to adventure in classical kingdom-with-knights-land.

Or north for some darker adventures in the Moonsea.

Go even further west, and the Western Heartlands open up a vast wilderland of scattered towns, secret elven kingdoms, ruins and exploration. Same with The North, only more desolate. 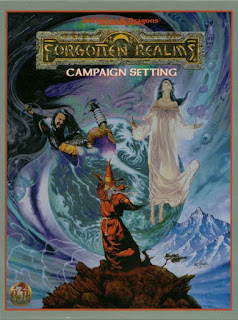 In its briefest summation, the Forgotten Realms is a Tolkienesque setting that, with the fall of Myth Drannor, became a roughshod Sword & Sorcery setting. And unapologetically vanilla kitchen-sink fantasy.

Moreso than the settings that came before (including Greyhawk), the realms embodies the implied setting of D&D.

By implied setting, I don't mean what grognards extract from pouring over every paragraph of the original publications, but from what fresh gamers imagine they will be doing when they start on D&D: Travelling through enchanted woodlands, meeting archwizards and sorcery queens, engaging with noble elves and encountering dwarven kingdoms, exploring ancient ruins and uncovering lost secrets in a land of forgotten glories. Whilst unceremoniously lobbing fireballs and enriching yourself with the stuff from the critters you just killed.

Basically, some diffuse mashup of Tolkien (Elves, dwarves, Dalelands), Medievalism (Cormyr), Sword & Sorcery (all over the place), some ill-defined American frontier mentality of exploration (western heartlands, the north) and on the edges of the known world - A barrel full of the truly exotic and weird that far away fantastical lands should have (beyond the heartlands).

For comparison, I think this mix is what has made the realms more appealing than Greyhawk which is often seen as bland. The Tolkien influences are less clear there and all the realms of men are, by design, wholly mundane (since, in Greyhawk, the encounter with the Weird and fantastical happens when crossing into the wilderness) - So no sorcery queens, godkings or other weird stuff that people see themselves meeting when playing D&D. The Forgotten Realms have all of it, albeit often at the edges of the known world (by the time of 3e, that edge was erased and you could totally have a group with an aasimar cleric, a genasi sorcerer, a dragonborn paladin and a drow ranger - just from the core setting book). 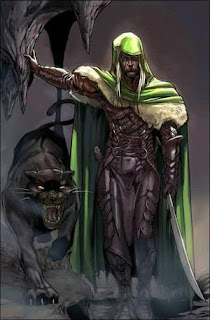 Let's start with the first criticism that is true no matter what iteration you use:

It's a Set Piece Setting

The realms may be primed for adventure, but it does feel a little too gamist.

I am not asking for Harn level of 'realism', but there is no sense whatsoever of how the current culture(s) of the realms arose.

For contrast, the World of Greyhawk doesn't give us details of how these arose, but they are easy to infer from the history and style of the setting. It's easy to picture farmers toiling in the soil in the Flanaess.

In the Realms, it's probably best to not look to closely at them, lest you discover they are just decorative props placed on the way to the next dungeon. It just feels a bit too much like a set piece for D&D adventures than a living breathing world.

The disjointed history of it doesn't help - It's basically a story of "...then this kickass empire did kickass things and left dungeons and artifacts behind before KABOOM. And then the next empire did the same, but with different artifacts..." - Which is a fine element to have. But nothing in it really tells us how the current realms came to be.

The Dalelands and Cormyr for example, are supposed to be these plucky up-and-coming realms nestled in the ruins of former majesties. But both are comparatively ancient to most other realms around (1200 years+) - Effectively making them weird for just having hung around for a 1000 years without any real development or change happening, with no real sense of  where these people came from or how their culture developed.

They could have made a lot more sense as human successor states arising in the wake of the fall of Myth Drannor, for example (which was still over 500 years ago - a very long time in medieval terms). Both in terms of age and development, but also in terms of telling us what they grew out of. Humanity as a fledgling culture developing on the borrowed remnants of their former elven patron empire. Alas, they basically seem to have popped from a vacuum and stayed that way for 1200 years.

Now for the second point of criticism

Most grognards favour the original gray box whilst latter generations tend to hail the 3rd edition book as a masterpiece of setting work.
For me, I prefer the 2nd edition boxed set, minus the Times of Troubles shenanigans. In fact, setting the startdate a decade or two before the original startdate still gets you all the best of the realms without the added junk (including Greenwood's own - Why would I go to the haunted halls of eveningstar when the knights of myth drannor already looted the place?).
The 1st edition set is just a tad too incoherent in its presentation to work for me. And that 3rd edition, while it did a masterful job of condensing a truckload of usable information into one tome, just made the realms seem too small and too busy. The Shining South was no longer a far away land of magic shrouded in myth - It was just another step on the trading route of known lands. Sense of wonder? lost.

Basically, the problem with the realms is everything that happened once the wheels started turning. Novels began being written and become 'canon'. Drizzt made good drow rangers cool. GreenwoodElminster bangs a high-level hot chick and goes and does some canon bullshit somewhere else. Harpers foil a plot from pantomime Zhentarim villains, etc. The time of troubles crapped on everyone's ongoing campaign (though it did hilariously spawn The worst module series ever), shadow wizards start invading the realm in other novels, bla bla bla. By the time we hit late 3rd edition, I didn't even want to know what was going on anymore. It's more marvel-universe-in-fantasy-dressing than whatever it used to be.
Then 4e came along and basically trolled the Realms into extinction. 5e  tried a soft reset by advancing the timeline enough to make the far future a bit more like the good old days. whatever. Take me back to 1340 DR please.

Basically, Forgotten Realms is an evocative setting that fits D&D assumptions like a glove and works eminently for gaming -  It is however, also a hot mess, greatly encumbered by decades of being a shared world. With a bit of discipline, this can be shaved off for a perfectly good D&D setting, if immersion is not too important.

Recommended point of entry? Get the 1st or 2nd edition boxed set, read the setting and imagine it 10-20 years early than the set presents, somewhere just before Greenwood's own groups started running the realms. Maybe read the first few sourcebooks released for it. Get the setting from that. If you need more, you have a wealth of material to choose from, but treat it like salt - A bit added can enhance the flavour. Overdose and you'll ruin an otherwise perfectly good meal.
Posted by Anders H at 16:09