This is the first entry in a series on Mythic Greyhawk. Upcoming entries will include Religion & Cosmos and History, Kingdoms & Cultures and what else I end up thinking of.

Mythic Greyhawk takes the Greyhawk Folio as its base (and looks at the boxed set more often than not) and borrows freely from other sources, whilst discarding and altering just as freely. The starting year is 576 CY, although most lands outside the great kingdom use Oeridian Record, of which the year is 1220.

Mythic Greyhawk is a world much like a medieval Europe. The following paragraphs are obvious truths to all its inhabitants:

The strange exotica of faraway lands usually more exotic than the tales told of them.

All the faerie tales are terrifyingly true.

Law vs Chaos is a self-evident cosmic struggle that Oerth and mankind are embroiled in.

Magic, The Weird, Chaos, the Supernatural is an obvious tangible truth that imperils all mankind and the fate of the Oerth itself.

The Gods of Law (aka the Oeridian Pantheon, or The One-Above-All, if you follow the Church of the Blinding Light) are what keeps the forces of Chaos at bay and holds the lands of Mankind safe. For now.

The polytheistic gods of the old world order may have given some way, but are far from vanquished, in the face of a mono-/heno-theistic church.

The occult workings and experiments of the eccentric scholars, alchemists and mystic savants called "wizards" can somehow tame Chaos and produce so-called "arcane magic". But how controlled is it really? And who can say how tainted they become? Godly and Law-abiding people do not meddle with such forces. Witch hunts are rare, but wizards mostly stand outside the social ladder on the fringe of society, somewhere between shunned and exiled.

The aesthetic is a grimey fairytale medieval Europe, mixed with the fantasy Sword & Sorcery aesthetic of Leiber, Howard and Jack Vance blended in, with a dash of generic D&D adventurer fantasy in the vein of Quag Keep. So yes, you can play a redhaired Flannae Battlemaid amazon or be a were-shifting berserker, even though people usually look like this: 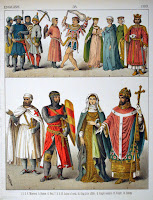 I rationalize this intrusion of pulpy S&S vibes upon a classically medieval world by telling myself that if the same forces of Chaos that are present in Greyhawk intruded upon a fairytale Europe, such a Europe would also have a good deal of fantasy Mad Max vibes happening in the borderlands.

One thought about Greyhawk is its monsters to mankind ratio. I assume that within civilized areas the ratio is somewhat low, at least at a level where it is a low enough concern that the human states can find the time to raise their gaze and make war on each other, instead of knocking back monsters.
Are the threats of a more hidden, perhaps even subversive, nature, a la Warhammer? Something to ponder for later.

The Mythic part of Greyhawk comes from a tangible distinction between Law and Chaos and, by extension, mythic geography. There are the settled lands of Law, where the normality of medievalist life is most prevalent. And the Deep Wilds, where Chaos reigns - Here the laws of naturalism give way to narrative physics, time and space can distort and looks and feel are strongly colored by the sentience of the locale. It is in many ways a journey into the Otherworld, albeit one made on foot.

In between are the Borderlands that put the grey in hawk, where Law and Chaos mingle, creating a surface semblance of normality among the people living there, which is always cast in the shadow of Chaos lurking on its edges. Non-humans threats are never far away. Regular folk know never to step off the trodden path, because the woods are always wild and monstrously dangerous if you go too far. Conversely, the mythic mold conceal many lost riches that Chaos has since grown over - There for the foolhardy to plunder if they can survive it.

As a little preview of the kingdoms and cultures entry, I am doing the City of Greyhawk as a last bit here, since it is such a seminal location, and I believe will say a lot about the world at large:

The City of Greyhawk - I take my main queues here from Quag Keep here:

The eternal war between Law and Chaos flared often in Greyhawk. It was in a manner of speaking a “free city”-since it had no one overlord to hold it firmly to his will. For that reason it had become a city of masterless men, a point from which many expeditions, privately conceived and planned for the despoiling of ancient treasures, would set out, having recruited the members from just such masterless men as Milo himself, or perhaps the berserker only an arm’s length away. But if those on the side of Law recruited here, so did the followers of Chaos. There were neutrals also, willing to join with either side for the sake of payment. But they were never to be wholly depended upon by any man who had intelligence, for they might betray one at the flip of a coin or the change of the wind itself.


As a swordsman Milo was vowed to Law. The berserker had more choice in such matters. But this place, under its odors of fresh and stale food, stank to Milo of Chaos.

I love this description - It frames the city as a proper seedy place, one whose 'free city' part makes it altogether dangerous (the city watch's main duty is to stop riots. They will do little to break up a fight - there is little of the protections one might expect from the rule of Law).

Its neutrality has little to do with any kind of balance, but simply being willing to take cash from both sides. It's Law mixed in with Chaos, an unstable melting pot that may spill over in ay which way, rather than a point in between the two (note also that Chaos is tangible enough to have a stench). Greyhawk is the urban epitome of the 'neutral' Borderlands where Law and Chaos live side by side, where danger is everywhere and opportunities for men of the sword likewise flourish.

Greyhawk is a city of ill repute to regular folks, where orcs can be found in the marketplace. I see it as a less fantastical, but a bit seedier, prime version of Sigil (of Planescape fame). It is 'governed' by whatever makeshift peace various factions can come to and the fact that the status quo serves everyone well enough. And is a place where people of all sorts, good and bad, find themselves passing through and doing business. The "gem of the Flanaess" bit might have held up during the time of Zagyg, but is mostly used with wry irony these days.

Finally, a pic dump to set the flavor and atmosphere.