I find that I am enjoying chronicling Mythic Greyhawk more than I anticipated. Much of it are impressions from way back when, but some of it is also new discovery from taking a closer look. One thing I like about exploring a non-homebrew setting like this is the sense of exploring an independently existent world. The fact that others have studied the same world, albeit through a different prism than my 'Mythic' one, renders a feeling that somehow Greyhawk exists 'out there' to be explored. My interpretations don't feel like creating either. It is more of a - "when looking through this mythic prism, what is Greyhawk really like?" I study the lay of the land, observe and mull until Mythic Greyhawk reveals itself to me. And putting all this into writing is like a refinement process. Greyhawk stands out much more vididly and alive to my inner vision now than before I started. It's been fun.

With that said, let's talk about religion, metaphysics and other higher order stuff. 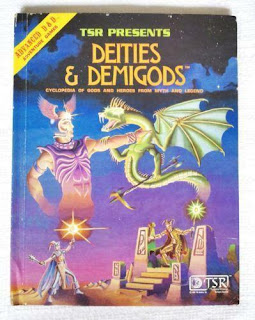 Overall, I am not terribly smitten with the Greyhawk pantheon, to be honest. It's a bit of a hodge podge. I like hodge podge, but it should be blended in with something a bit more thematic that links more visibly to the human cultures. Since they are not in the folio, I could have just discarded them, but I decided to give it a go anyway.


I mapped them out along basic alignment lines:

The Old Faith was the predominant 'religion' of the Flanaess before the great migrations and still holds sway in many places today.
It is centered around the primal spirits that inhabit the Oerth and whose concerns (unlike gods, demons, et al) are strictly confined to Oerth. They are the Neutral (of the 'leave-us-alone' variety) buffer between the forces of law and chaos that keep gods and demons alike out of Oerth.

As "neutrals", they are not so much interested in balance for the sake of balance, but rather for the self-preserving concern of safeguarding Oerth, their dominion, from being overwhelmed by the forces of either Law and Chaos.
Unlike the gods, they neither require nor ask for worship, but may nonetheless be supplicated for favors through various rites and sacrifices. All priests of the Old Faith are druids of various sorts - even the psychopomp Death Druids of Nerull and the Harvesters of Incabulos (the sane ones mostly work to keep his 'gifts' away. The others are frigging feral). The major primal spirits of the Old Faith are:

The gods of Law, the pantheon of the Great Kingdom and beyond, are seen as the major patrons of mankind across the Flanaess. They are the standard-bearers against the forces of Chaos that would otherwise overwhelm the world and the main reason why Man has ascended to its tentatively dominant position in the Flanaess.

They reside in the Overworlds of the Astral Dominions (being barred from Oerth itself by the aforementioned primal spirits) and rely on worship for their power - As such they have a strong vested interest in mortal affairs, which is also reflected in their themes and domains. They are almost all of them gods of human endeavors.

The Church of the Blinding Light

The heno-/mono-theistic Church of the Blinding Light is devoted to the worship of Pholtus/Pelor/Rao (his name differs depending on culture and theological interpretation of his most important aspects, but all agree it is the same god) as the One-Above-All.

'He' had a presence in all human pantheons but in 251 CY revealed himself to priests of Ferrond to be the one true god of Law (three years later, Furyondy would be founded in Dyvers as a result) and was further strengthened when the people of Nyrond and its satellite states saw the Light, converted and broke away from heretical Aerdy, establishing the Church as the biggest religion in the modern Flanaess.

Certain patron saints of the One-Above-All, who have become hero-deities in their own right, are also supplicated. Most notable of these is St. Cuthbert.

The Suel pantheon was once the primary hegemony of Law on Oerth, but fell from power and influence after the Rain of Colorless Fire. These ancient fallen gods  are still found in places, but are mostly degenerate shadows of what they used to be, insane, embittered, turned savage or even feral, or all of the above.

A range of other gods exist who are mostly ignored by the gods of the established pantheons due to being either too insignificant or pursuing aims that do not impact the cosmic concerns of these pantheons.

This covers anything from fledgling hero-gods, highly local deities, forgotten and sleeping gods of ancient pantheons, the gods of the Flan (in addition to the Old Faith nature spirits) and the mysterious Bakluni gods, but also gods such as Boccob the Uncaring, the ancient god of magic who is somehow a tangential part of every pantheon, and his recent vassal Zagyg.

Religion is mostly a human thing, that's why humans see themselves as especially privileged species of Law and why they are the ones who tentatively rule the roost of the Flanaess. Halflings and dwarves are also lawful and have pantheons similar to Mankind's (with a few patron gods specific to their own kind), but this is glossed over.

Elves as neutral to chaotic children of the Oerth, have no gods and do not care for the cosmic conflict of Law and Chaos. They have a relationship of a sort with the primal spirits of the Old Faith but do not venerate or worship them the way humans do. They see themselves as being basically of similar family stock as these beings and you wouldn't worship your grandfather, would you?

Other creatures also do not have gods. The "gods" of goblins, orcs, hobgoblins etc. are not gods at all, but the foul lords of the host of Chaos, demon princes and devil lords. That's like totally different.

When places become too dissonant with the orderliness of the Law set down by the current godly hegemonythey warp and rip out of sync with the reality of the rest of the world to a certain extent. They become more akin  to private pocket worlds or demi-planes, where space, time and other rules of reality can become distorted. Essentially, chaotic pockets and hollowings in Oerth's otherwise regular dimensional fabric of spacetime.

Fading Lands become more frequent once you pass from the corelands of civilization and into the borderlands. In the deep wilderness where Chaos is still thick and unrestrained, the boundaries between fading lands and 'normal reality' become increasingly indistinct and blurred.

Common to all Fading Lands is the sense of otherwordliness, of being in a land-out-time (or at least has its own rhythm and pulse of time), that all visitors instinctively feel after entering one. Fading Lands do not participate in the same flow of time as the rest of Oerth.
They are remnants of something lost, akin to memories of something that once was, which the Oerth can no longer hold without losing its structural integrity in time and space.

Some Fading Lands are more otherworldly than others. Some of them may connect, or be coterminous, with the Overworlds or underworld. What distinguishes them from the Over and Under Worlds is that, though connections may be faded, they still have links or origin on Oerth and are in some way or another connected to Oerth geography and/or history.