Greyhawk & I - My journey into D&D Land

I've written about Greyhawk before without ever telling the story of my own relationship with the setting.
I came to it rather late, in the late 90s when it had been long discontinued (even the From the Ashes reboot had been discontinued), at a time where I considered myself savvy in the worlds of Dragonlance (my first D&D world), Forgotten Realms (cool things in there, but why is it that popular?), Dark Sun and Ravenloft, and the only thing I knew of Greyhawk was as the red-headed stepchild of TSR.

My first real encounter with Greyhawk though was through a Danish magazine, SAGA, written back in 1992, that did an "intro to greyhawk" article titled "Greyhawk - The oldest of all worlds" that caught my imagination.

This seemed like a setting that had room for all the things I expected from a genuine D&D fantasy setting. More room for medievalism, more kings and knights, even wars that weren't "against the evil overlord" but between people. Room for something a bit more grimey day-to-day life without going full warhammer. And faeries and elves having their place without going all Tolkien about it. Basically, what I was missing from the Forgotten Realms (too cardboardy) and Dragonlance (better, but severely lacking for classic dungeoncrawling adventures).

Perhaps even the world that was implied whenever generic D&D articles were written in Dragon, the implied world of non-setting D&D supplements. Although there is probably little connection between Greyhawk and the background assumptions of the writers of 2nd edition AD&D supplements, in my young mind, I pictured that Greyhawk is the world where my Complete Fighter's/Elves/Thief's/Bard's/Ranger's/Villain's Handbooks all take place in without modification. Where the kits there all have a natural place and the examples all fit. The illustrations in the PHB and DMG happen in Greyhawk. Don't they? 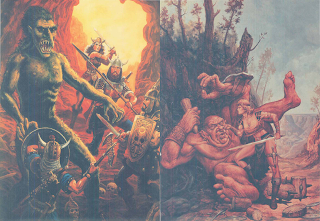 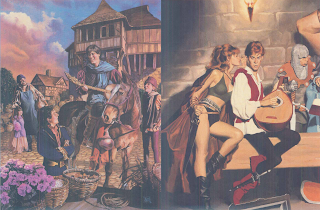 Getting to know more about the ur-setting of D&D was difficult though. None of my local gamestores carried any Greyhawk anymore. Neither did the libraries. My local library's back catalogue of Dragon Magazine began just after Gygax stopped writing his serials about it.

It was discovering the internet at my dad's office that opened the first gates. There I discovered that WotC had been digitizing and putting online a few nuggets, most notably Greyhawk Mysterious Places from the Greyhawk Adventures hardcover and the history of the Greyhawk Wars which I duly printed out, along with the first releases of something called "the oerth journal" and learning what a 'zip' file was so I could Get to all the good stuff on geocities. Over that summer, I would devour these documents over and over, looking at every detail to try and fill in the many blanks I had. The Dragon Magazine articles in the wake of "from the ashes" helped a bit (though I quickly determined that the world I really wanted to explore was 576 CY).

But it was always supplementary material I was studying, written by people who all assumed that of course I knew what was written in the boxed set(s) that was nowhere to be found wherever I looked. In a way it contributed to the sense of adventure in my readings. I was exploring something elusive and genuinely mysterious to me, trying to grasp a world where the centerpieces had been blanked out.

After a few years, the enthusiasm of the online Greyhawk community led by guys like Erik Mona and TSR employees like Roger Moore who were part of that (mostly on AOL which was closed land for me) laid the seeds for restarting Greyhawk publishing and bringing it back to what it was before From the Ashes. The Player's Guide to Greyhawk is probably the publication I have waited most eagerly for in my life. I picked it up immediately. Ok, the Flanaess map wasn't quite what I was hoping, but it was there. And the Domain of Greyhawk map was wonderful. The original adventure territory. Fantastic. And even though it presented only a scarcely sketched outline of Greyhawk, it was finally there - The missing skeleton that all my explorations centered around. Sure, those who had access to older materials might know more, but at least I was now on somewhat level footing with the writers whose supplementary writing I had been using to explore it.

Kudos also to Roger Moore for really getting the setting. It would have been easy to botch it up, but the Player's Guide and The Adventure Begins are works that read to me most of all like restrained loveletters to the setting. Which is exactly what they ought to be.

Years later, I flipped through the Greyhawk Gazetteer and Living Greyhawk Gazetteer by Erik Mona and, though I greatly admired his former online writings as "Iquander", this take on Greyhawk just seemed off the mark, soulless somehow. This was just a setting, not the D&D Land I had explored.

Years later still, I would pick up the original folio from Ebay for a pittance. I was a bit hesitant really. Would I recognize this as the D&D Land I had been exploring?

Of course it was. It hit the mark so straight actually, that I didn't really feel the need to pick up any more material to full out the missing skeleton of former years. I realized that the terseness and scarcity of the setting was part of its magic. The huge skeleton I had assumed I was missing was, in fact, not much less sketchy than the one in the later Player's Guide and The Adventure Begins. And it worked.

Here's the thing. When people complain that Greyhawk is too generic with too many ill-defined places - Don't you see that's the whole point? Even now, despite my dis-wondered years of adulthood, when I visit Greyhawk I still get that sense of "the world of D&D". It's a bit of wonder I would wish for any gamer to have - Whenever I read an old Dragon article, or pick up any D&D supplement that implies generic D&D fantasy, I have a place for it, it transports me to the World of Greyhawk. "Hmm, this article takes place in... Urnst, I think" (I don't know that much about Urnst, I just have a vague feel of what it's like). And somehow I never run out of places to put all these things in. Greyhawk holds room for it all.


Next up, "Alternate Oerths: Mythic Greyhawk" - My own spin on the setting.
Posted by Anders H at 10:22